Lately, I have been (being) introduced to reactive programming in general and Rx in particular by @headinthebox. Reactive programming is a set of techniques to perform computations on streams of values rather than on just values. What is the difference? Streams represent the state of a structure in a specific point in time. Thus they are, by definition, unbounded. This leads to interesting problems that need to be solved; for example, when we want to sum the results of a list we can do a fold or a while loop; this is only possible because we know in advance the length of the list.

But how can we construct streams? This is easy: every time a program receives and processes asynchronous events, it is basically reading a stream of events. As most programs we write (from GUI applications, to servers, to operating system kernels) do receive stimuli from their environment, most of us have already done reactive programming, one way or another! The basic trickery behind reactive programming and Rx is formulating asynchronous event streams as data structures and then running higher order functions on them. Erik, of course, explains all these much better in his brilliant paper Your Mouse is a Database.

The discussion on streams (or signals, as known in other contexts) however blurs the practicality of reactive programming. The practice boils down to creating Observable sequences of events (e.g. by poling an API or waiting on a socket) and then assigning actions to incoming events. The interesting situations start when we combine several streams, in a time-dependent fashion: say that we want an action to occur as a result of polling two APIs and combining the responses based on a common attribute. Luckily, the complicated interactions are hidden quite well behind the Rx API; powerful operators such as Merge that merges events from two streams in one or Buffer that creates a time window of events before firing the event processors are available.

To make sure I understand the basic concepts, I decided to write a program that identifies “vanity pull requests”, that is Github pull requests whose URLs are then tweeted by their creators. The process to retrieve those is straightforward: for each new pull request, as exposed by the Github event API, I get the user that created it and look for the pull request URL in his/her Tweeter steam (which I obtain through the Twitter search API) for 10 minutes. For simplicity, I am making assumption is that the user’s Github and Twitter accounts have the same user name, while no URL shortening happens on the Github URL (both relatively fishy). I had written some initial code myself (in C# even!) and on (Catholic) Easter eve (6th Apr 2013) we sat together with Erik to make it actually work.

Creating collections out of API calls

The first thing the code needs to do is to retrieve the Github event stream and process it. Here is the code:

The code sets up a basic authentication header and then creates an HTTP client to query Github with. The method then reads the stream, parses the returned JSON object and, using LINQ, it filters out pull requests which have more than one commits and returns the Github user names of the pull requesters.

Notice that the method has been marked as async. When a method is async the C# compiler looks in the body of the method for a corresponding await call; it then converts the remaining body of the method to a continuation function which is to be called after the awaited method returns! Yes, this is continuation passing style hidden by a very clever compiler trick. The ReadGithubAsync method is fully event based and asynchronous and can perform non-blocking multi-threaded I/O, which apparently is the holy grail of modern web frameworks. What’s more is that the simplicity of this approach makes event-based frameworks such as Node.js, EventMachine and Gevent look naive and awkward.

The method that reads the user’s Twitter stream is similar but simpler: it sets up an HTTP client for the Tweeter search API, filters the returned tweets for the string github.com/.*/pulls/ and returns the tweet text:

What we have now is two asynchronous methods that read data from the corresponding APIs; what we need to do is combine them. Intuitively, we first need to read the Github event API periodically and for each returned pull requester, read his/her Tweeter stream for some time and return all tweets that contain pull request URLs. There emphasized terms highlight the several time dependencies this very simple example has. Time dependencies can be quite tricky to understand; what Erik and the Rx team usually do is draw marble diagrams. Marble diagrams present events as marbles (hence the name), colour coded by a specific event property, on an abstract timeline. A timeline can be owned. In our case, the colouring represents the user that initiated the event. Here is a hypothetical timeline of Github pull requests as returned by ReadGithubAsync:

We see that the timeline is not owned by any entity; we also observe (pun intented) that a user might have more that one pull requests, while those might not come in regular intervals. To retrieve the tweets, we need to filter the pull requester login names and feed them to our ReadTwitterAsync method, effectively creating a timeline of tweet events per user, as shown below: 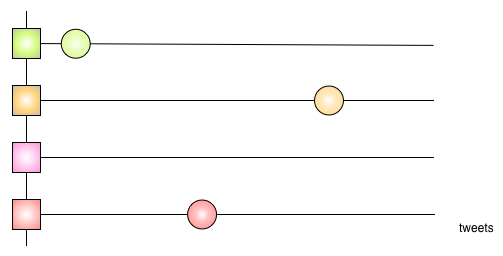 The question now is how we go from one the first timeline to the second. LINQ to the resque (warning: query for demo purposes only)!

Alright! Now we have combined the two streams, but if we call the LINQ query presented above, we will only get a single result, which will represent a single snapshot in marble diagram terms. How can we extend the marble diagram timelines to include multiple snaphots? Here is where reactive programming and Rx come into play. The first thing we have to do is convert our API calls to streams; in Rx terms, we need to convert the IEnumerables returned by our Read*Async methods to IObservables. The canonical way of doing that is use the static methods of the Observable class as follows:

Both methods setup a timer to call the corresponding backup method every 6 (Github) and 10 (Twitter) seconds. The Twitter case is slightly more complicated as Twitter’s search window is much longer (30 mins IIRC) than the polling interval. This means that we will get the same tweets (events) every time we call ReadTwitterAsync for a single user. We are obviously interested for an event only when we observe a new tweet; this is what DistinctUntilChanged does.

What we have now is two Observable streams; theoretically, we could just combine them using LINQ as we did with the Enumerable versions above. However, if we did that, we would loose all new users creating pull requests after the first call to PullRequesters. What we need to do is to come up with an updatable version of the static Tweeter marble diagram, where each new pull requester automatically creates a new Tweeter event timeline. To do so, we insert an intermediate step between polling Github and Tweeter for a specific user:

Notice the method signature: it will return an Observable of GroupedObservables, where each group is identified by a user. This way we both solve the problem of users issuing multiple user pull requests in the same polling period and create an observable group (and therefore list, if we just get the group keys) of users to read tweets from. Neat, eh?

Finally, combining the two streams (groups of users, and tweets for a user) is again a job for LINQ:

All this, in just 82 lines of code of unpolished code. Amazing, right?