For the past couple of weeks, I have been working on visualizing programming language communities. The result can be seen here: http://ghtorrent.org/netviz/. The graph visualizes language communities for any language identified by Github, using commits as the medium to identify project collaborations. This means that nodes represent projects (repositories) and edges represent a developer that committed on both nodes.

To build the visualization, I extracted all commits from base repositories (commits on forks are excluded) from the GHTorrent database, along with information about the project (e.g. language as identified by Github). The dataset I am using has: 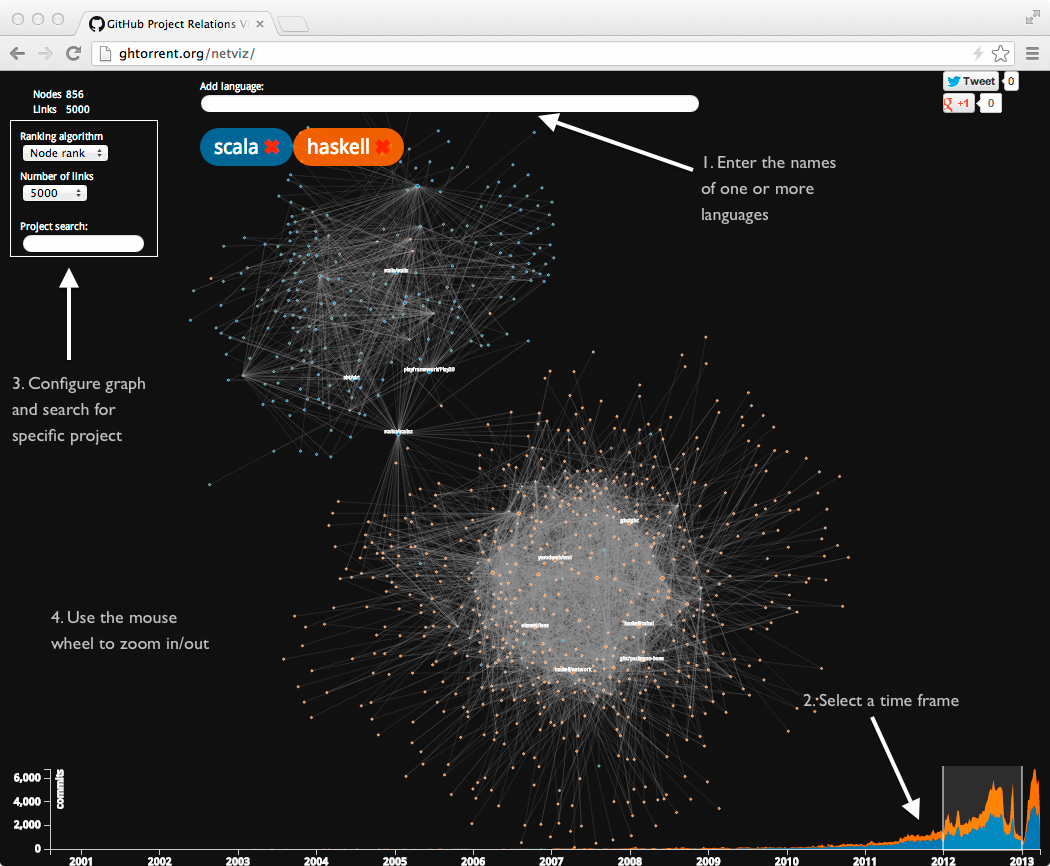 To start with the visualisation enter the name of your favourite programming language in the top level search box and wait a couple of seconds. A graph will start to move towards the center of the screen. It will usually look like a hair ball, because there are really too many connections among the projects, a good sing that developers are collaborating closely in the specific language ecosystem. What can you do next is:

As the graphs are rendered and animated in real time, a fast browser and computer is required. On my 1.8GHz MacbookAir running Mountain Lion with Chrome 26, the threshold after which animation is becoming too slow is 5000 links and around 800 nodes. My 4 core Xeon 2.6Ghz desktop with Cromium on Debian Wheezy, animations are relatively fluid at 7500 links and 3000 nodes. Your mileage may vary.

How it was implemented

An interesting challenge of this project was how to process 18 million commits (or 1.4GB of condensed CSV data) on request in (soft) real time. For that, I exploited 2 properties of modern software systems: i) the abundance of RAM ii) the higher level data structure constructs present in modern languages. As I had good experience with the abstractions with my general purpose language of choice (Scala), I decided to construct an in-memory graph of the raw data, choosing the least memory intensive datatypes for each object (e.g., Ints instead of Doubles, references instead of Strings when those could be shared etc). Then, Scala’s parallel collections would automatically split the work load of processing (filtering, grouping etc) the in-memory graph to multiple CPU’s. The full set of commits fits in about 3GB of heap, while queries can be processed using all available processors. For typical languages, discovering the nodes and links takes less than 500 msec.

Due to the huge number of examined commits, queries on popular languages produce equally huge graphs. For example, querying for Ruby in the default time window will produce a graph consisting of 57889 nodes and 421312 edges. To filter the important nodes, I implemented two methods of node ranking:

After running the ranking algorithm, the graph is reconstructed by retrieving the top 100 (configurable) nodes by their rank and all edges that contain them. The reconstructed graph is further cleaned from nodes with in-degree of one and their edges (to eliminate visual noise). Again this might not be enough: at this stage our Ruby graph would still contain 3084 nodes and 62180 links. A hard limit of edges must be enforced: to do that, the algorithm sets a target number of links (by default, 5000) and randomly removes links from the graph, but it pays attention not to remove links that will leave orphaned nodes.

To visualize the results, I used the amazingly powerful d3js library. My limited (read: non-existent) Javascript skills did not allow me to write code that I am proud of, but using d3js was a pleasure. Instead of relying on iteration and mutation, d3js uses arrays as collections and higher order functions that operate on those. The result is a fluid API that makes sense, after you get used to the underlying concepts. To that end, the examples at the d3js gallery help a lot. Except from the initial data retrieval, all operations happen at the client side. New data are retrieved only when a new language has been added or the time window has changed.

The API is open for use by anyone, so if you do not like this visualization, you can build your own. The result format is JSON. The API is rooted at http://ghtorrent.org/netviz/. The end points and parameters are the following:

/links: Get nodes and links in the format expected by d3js.

/hist: Number of commits per week for the languages in the argument:

/langs: A list of languages recognized by the system

http://ghtorrent.org/netviz/links?l=scala&l=clojure: This will return the graph for the whole lifetime of the data set, for the languages Scala and Clojure constrained to 5000 edges

As always, you can find the source code on Github: gousiosg/ghtorrent-netviz. Please file issues and requests using the project’s issue tracker instead of using this blog’s comments.