How projects use pull requests on Github

Pull requests form a new method for collaboration on distributed software development. The novelty lays in the decoupling of the development effort from the decision to incorporate the results of the development in the code base. Several code hosting sites, including Github and BitBucket, tapped on the opportunity to make the pull-based development model more accessible to programmers. A unique characteristic of such sites is that they allow any user to fork any public repository. The clone creates a public project that belongs to the user that cloned it, so the user can modify the repository without being part of the development team. What is more important is they automate the selective contribution of commits from the clone to the source, through pull requests.

Pull requests are not unique to code hosting sites; in fact, the Git version control system includes the git-request-pull utility, which provides the same functionality at the command line. Github improved (not everyone agrees) this process significantly by integrating code reviews, discussions and issues, thus effectively lowering the entry barrier for casual contributions. Combined, cloning and pull requests create a new development model, where changes are pushed to the project maintainers and go through code review by the community before being integrated.

A year ago, together with Martin Pinzger and Arie van Deursen, we set forth to explore how this new and exciting way of building software in a distributed manner actually works under the wraps. How widespread is the use of pull requests? What are the characteristics of the pull request lifecycle? What factors play a role in the decision to merge and the time to process pull requests? Why are some pull requests not merged?

The dataset we used to do this study was based on our previous work on GHTorrent, a queriable off-line mirror of the data offered through the Github API. The project has been collecting data since February 2012. Up to August 2013, when this study was conducted, 1.9 million pull requests from more than 200k projects have been collected.

Here is what we learned.

Use of pull requests on Github 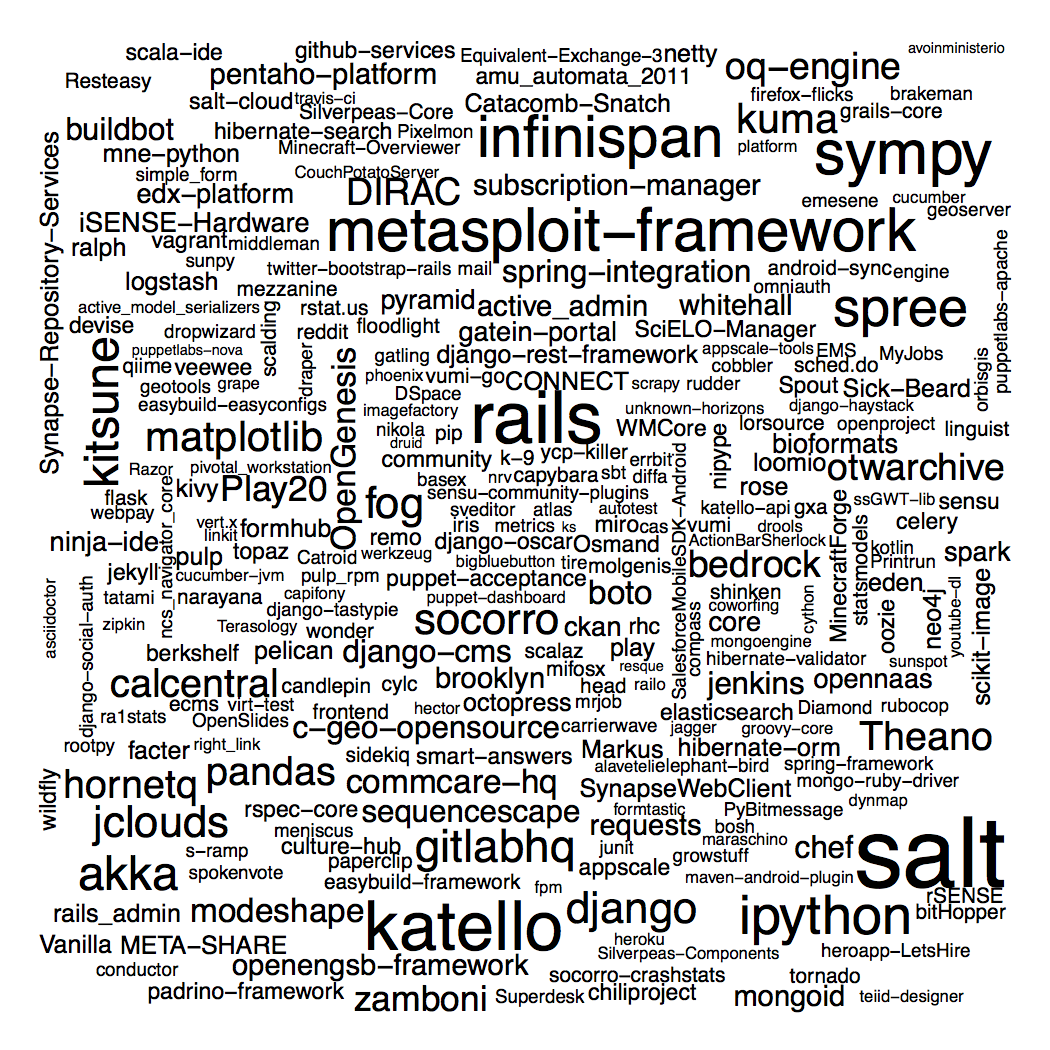 The GHTorrent dataset is good to get an overall view of pull requests across all projects on Github, but we wanted to go deeper than that. For this reason, we selected all projects written in Ruby, Python, Java and Scala (why just those languages? because testing detection is possible) that had more than >200 pull requests in their lifetime and using a combination of GHTorrent and their Git repositories, we extracted more than [40 features](https://github.com/gousiosg/pullreqs#generating-intermediate-files) for each pull request. We also applied heuristics to detected merges happening outside Github (e.g. using `git merge`, `git rebase`, cherry-picking etc). This brought the number of merged pull requests up to 84%. In total, we analyzed 291 software development projects (99 Python, 91 Java, 87 Ruby, 14 Scala) and 166,884 pull requests. We then analyzed the generated data in various dimensions, in order to identify the lifecycle characteristics of pull requests and determine the factors that influence them. **Lifetime** 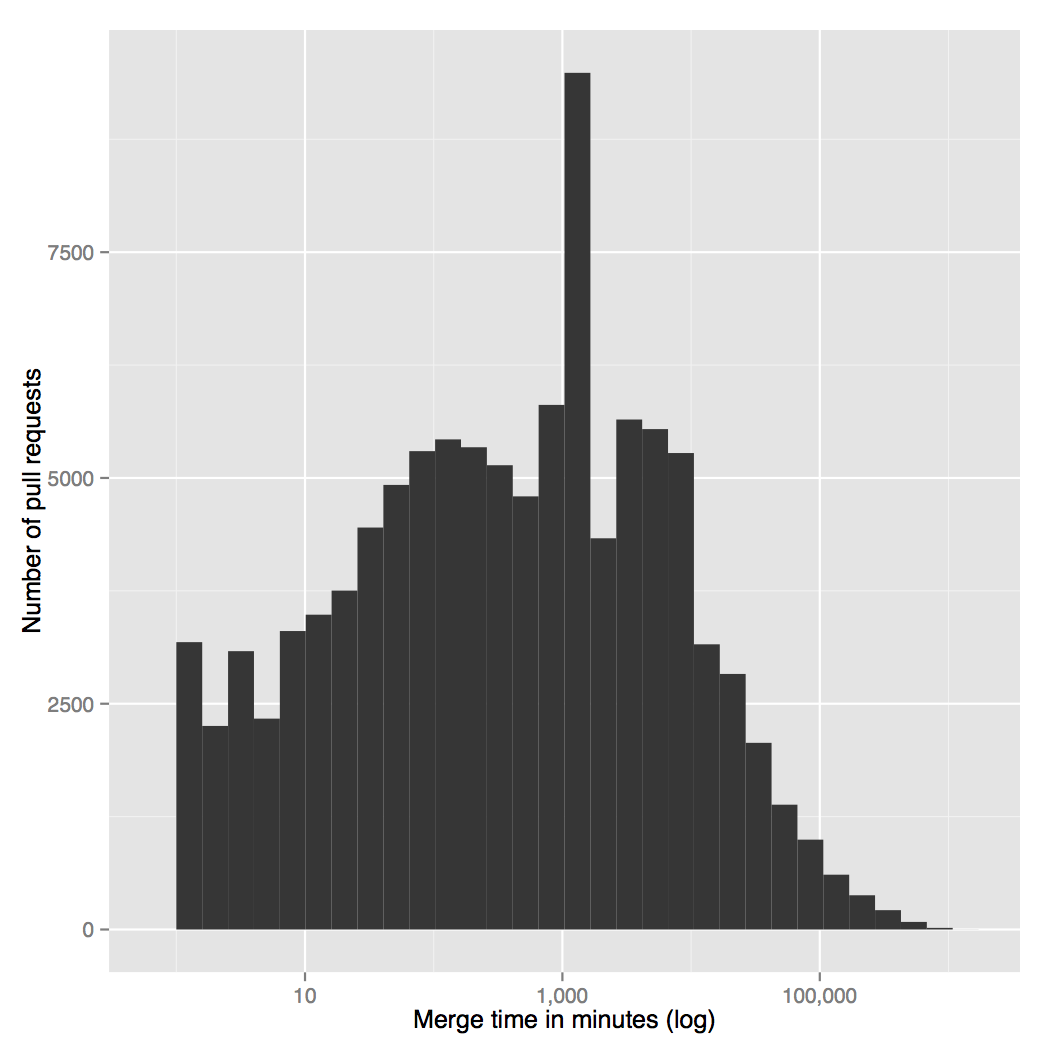 By correlating pull request features with the time to merge and the time to close pull requests, one can find very interesting patterns. Here is a list of our most interesting findings: * The time to merge pull requests is highly skewed, as can be seen in the figure above, with the great majority of merges happening very fast. Measured in days, 95% of the pull requests are merged in 26, 90% in 10 and 80% in 3.7 days. 30% of the pull requests are merged in under one hour! * Pull requests are either merged fast or left open lingering before they are * closed. Pull requests received no special treatment, irrespective whether * they came from core team members or from the community, as there is no statistical significant difference in the time required to close both. * The time required to merge pull requests is not correlated with the project's size, but it is correlated with the pull requester's track record. The more pull requests that have been accepted by a specific developer, the faster his/her new pull request will be processed. This is an indication that eventually even software developers can learn to trust each other :-) **Size** </table> The table above speaks for itself: most pull requests are small, touch only a few files and consequently only a few lines. A reader well-versed in statistics will also see that the distributions of those variables are highly skewed. **Discussion and code review** Once a pull request has been submitted, it is open for discussion until it is merged or closed. The discussion is usually brief: 95% of pull requests receive 12 comments or less (80% less than 4 comments). Similarly, the number of participants in the discussion is also low (95% of pull requests are discussed by less than 4 people). Code reviews are integrated in the pull request process. While the pull request discussion can be considered an implicit form of code review, 12% of the pull requests in our sample have also received comments on source code lines in the included commits. This of course does not mean that the remaining pull requests have not been code reviewed. Code reviews do not increase the probability of a pull request being merged, but they do slow down the processing of a pull request by an order of magnitude. **summary:** *Most pull requests are less than 20 lines long and processed (merged or discarded) in less than 1 day. The discussion spans on average to 3 comments, while code reviews affect the time to merge a pull request. Inclusion of test code does not affect the time or the decision to merge a pull request. Pull requests receive no special treatment, irrespective whether they come from contributors or the core team.* ### What factors influence merging and time to merge? To measure the combined effect of factors on the decision to merge a pull request and the time it takes to do so, we employed machine learning. Given the 291 project dataset discussed above, we trained 2 classifiers, one for each question, using 3 well known classification algorithms (logistic regression, naive bays and random forests) without any tuning. We then calculated the mean area under curve and accuracy metrics across random selection 10-fold cross validation runs on the whole dataset, to select the best algorithm. Data mining people reading this will probably laugh with our algorithm selection, but deriving the best possible classifier was not our goal. In both cases, random forests outperformed (by far) their two contenders. So we selected random forests. The random forest algorithm can report the relative importance of features to the prediction outcome (the mean decrease in accuracy metric), which we used as the result of this experiment. To estimate it we trained random forest classifiers on half of the dataset, chosen randomly in a loop of 100 runs, but with ridiculously high configuration parameters per (2k trees, tree depth of 5 etc). We then estimated the mean MDA per factor, as can be seen in the following figure. 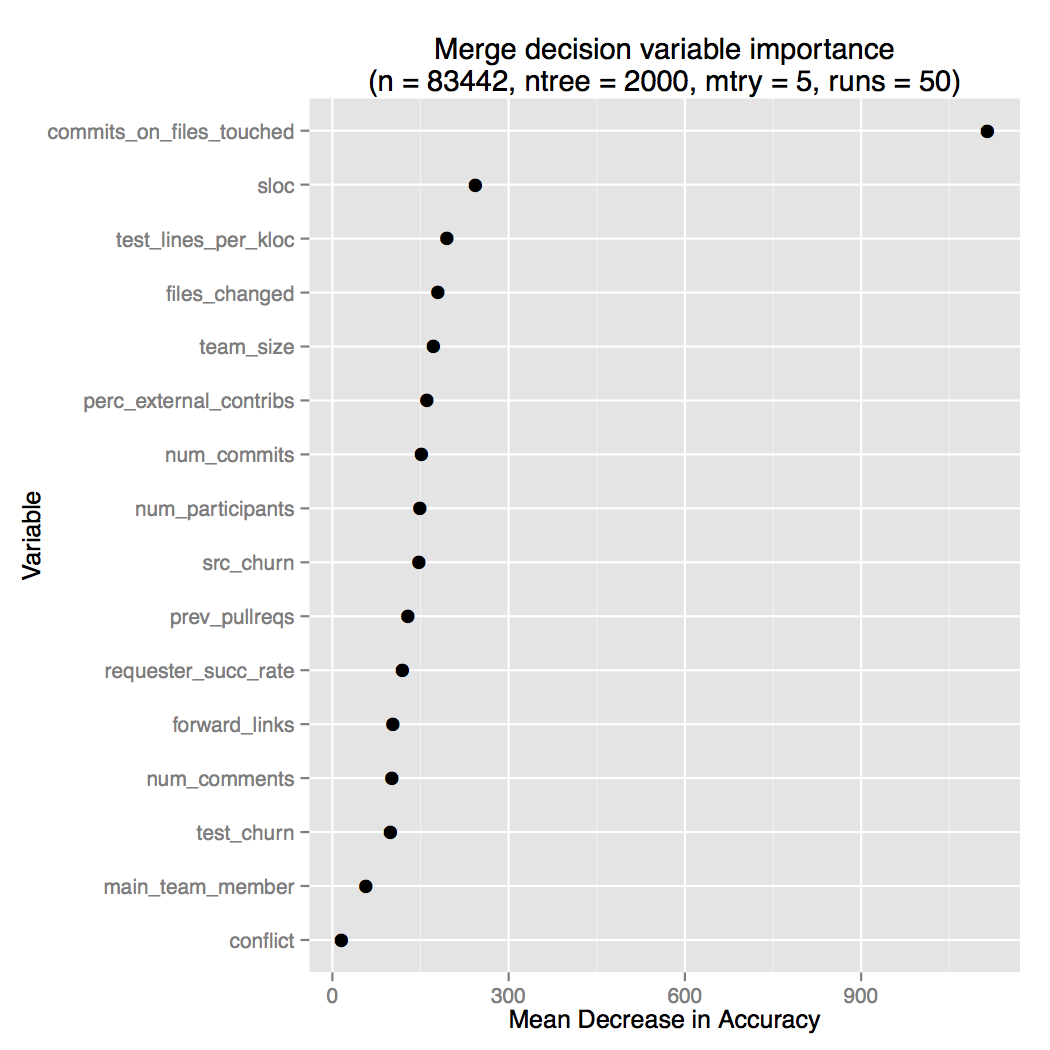 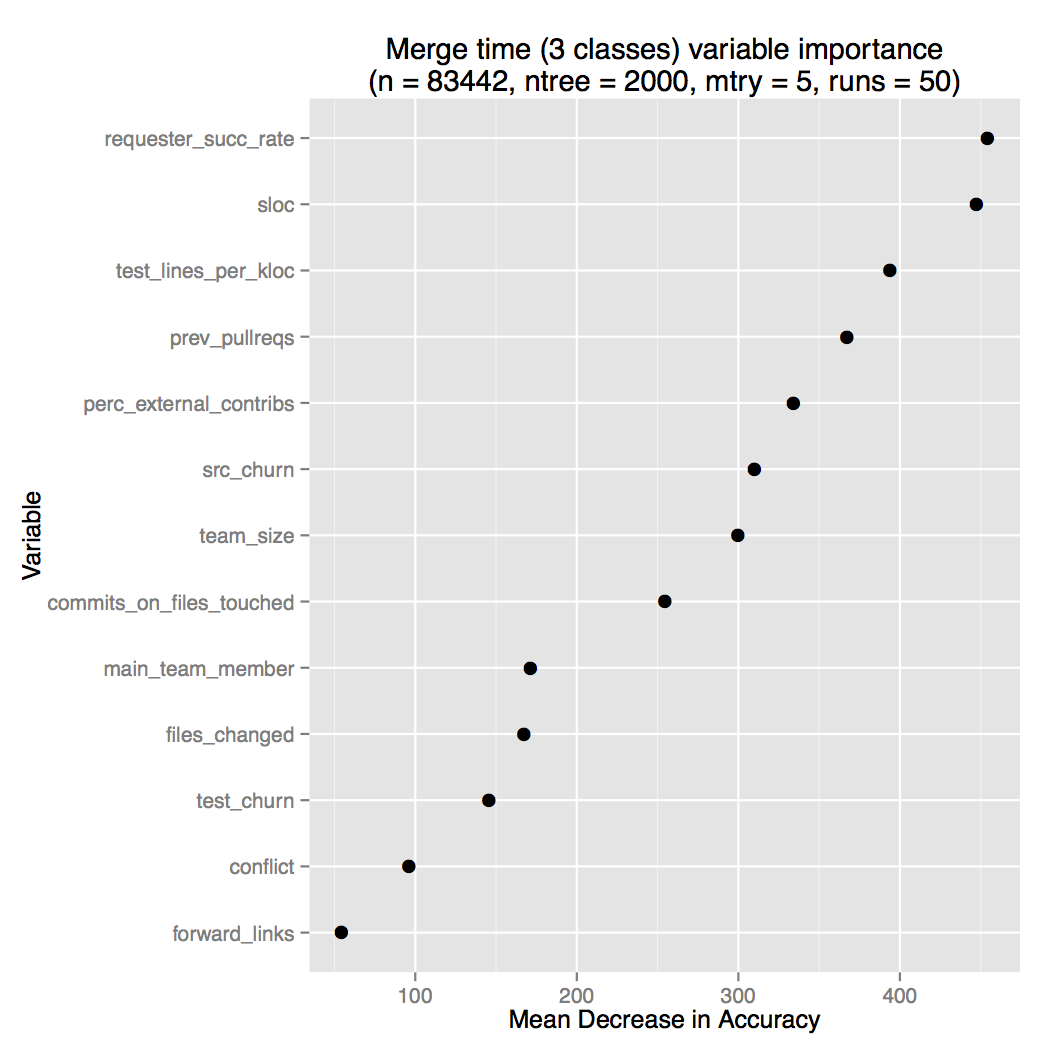 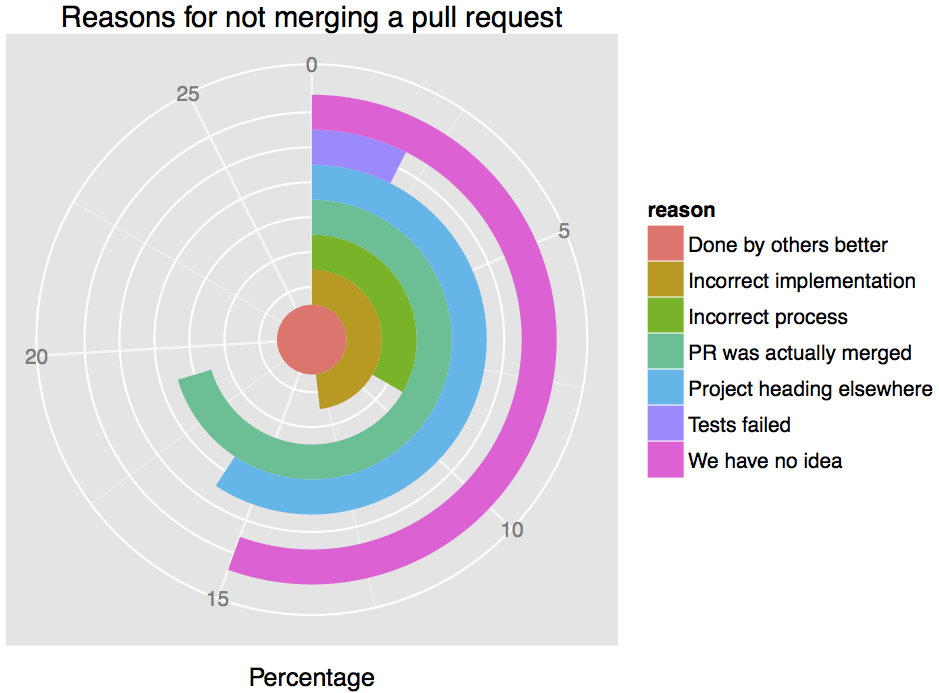 Apparently, there is no clearly outstanding reason for not merging pull requests. If we group together close reasons that have a timing dimension, we see that 27% of unmerged pull requests are closed due to concurrent modifications of the code in project branches. Another 16% (superfluous, duplicate, deferred) is closed as a result of the contributor not having identified the direction of the project correctly and is therefore submitting uninteresting changes. 10% of the contributions are rejected with reasons that have to do with project process and quality requirements (process, tests); this may be an indicator of processes not being communicated well enough or a very rigorous code reviewing process. Finally, another 13% of the contributions are rejected because the code review revealed an error in the implementation. For 15% of the examined pull requests, we, as human examiners, could not identify whether they are merged or not by looking at them. For 19%, our inspection revealed that they were actually merged, which in turn suggests that our merge heuristics are not inclusive enough. The above may mean that the pull-based model (or at least the way Github implements it) may be transparent for the project’s core team but not so much for potential contributors. The fact that human examiners could not understand why pull requests are rejected even after manually reviewing them supports this hypothesis further. **summary:** *53% of pull requests are rejected for reasons having to do with the distributed nature of pull based development. Only 13% of the pull requests are rejected due to technical reasons.* ### Conclusion and suggestions The goal of this work is to obtain a deep understanding of the pull-based software development model, as used for many important open source projects hosted on Github. To that end, we have conducted a statistical analysis of millions of pull requests, as well of a carefully composed set of hundreds of thousands of pull requests from projects actively using the pull-based model. Here are our recommendations based on our findings: **For contributors** Want to get your contributions accepted fast? Then: * Make them short * Make them hot **For project owners** Want to be effective in managing pull requests? Then: * Invest in a comprehensive test suite * Include pull request submission guidelines on a prominent location in your project * Make your project roadmap clearly visible * Ask your potential contributors to communicate their intended changes (e.g. through issues). **For researchers and Github** Projects are struggling under a constant influx of pull requests. Research needs to be done on tools that help developers sort and triage incoming contributions, assess their impact on the code base and recommends actions based on the characteristics of pull requests. For example, an outcome of this study is that it is relatively easy to predict whether a pull request will be merged or not, so a tool that labels pull requests as you 're gonna merge this might help developers to focus on difficult to process pull requests. The GHTorrent dataset is documented and distributed on [this website](http://ghtorrent.org). The extracted datasets as well as custom-built Ruby and R analysis tools are available on the Github repository [gousiosg/pullreqs](https://github.com/gousiosg/pullreqs), along with instructions on how to use them. See the contents of this post in presentation format: ### Postscript A couple of weeks ago, we learned that the corresponding paper was accepted in the proceedings of the [36th](2014.icse-conferences.org/) International Conference on Software Engineering (ICSE). Here is a pre-print, where you can find an in depth account of the tools and techniques we used to come up with the results we present here.